Jan says "My husband Bruce and I were active in the gym at least three times a week. In the early part of 2003, I was not feeling myself and I noticed my exercise routine was getting more difficult. In February 2003, I met a woman named Shelly, a registered nurse, at the gym. She and I hooked up together, lifting weights and doing abdominal exercises on the mats. She was still grieving over her sister, who had died of breast cancer six months earlier.

I asked Shelly why I felt worse after a workout, especially in the abdominal area, where I was bloated. She asked me if I had backaches. I told her that yes, sometimes I did. She told me that my symptoms could be ovarian cancer and that I should see a doctor. Well, that hit me like a ton of bricks. I made an appointment with my primary physician.

My physician recommended blood work and a test called Ca-125 tumor marker for ovarian cancer. Within a week, he called and said the Ca-125 came back 1119. When I asked what was normal, he said 0 to 35. He said he would make an appointment for me to have an ultrasound." When I was 25, I was living in Washington, DC, working as a television producer and loving life. I felt great and healthy, so I put off getting my routine Pap test for a few years. I thought it could wait.

When I finally did go for a check-up, I got the shock of my life. I had cervical cancer. I was devastated, and I asked myself how this was possible. I was too young and too strong for this. I've been a hairstylist for more than 35 years. I love to read and listen to music. My daughter is in the music business. I've worked in New York City for Broadway shows and for Saturday Night Live, but I was a freelance stylist when I found out I had cervical cancer. I never thought I would have cancer, but in 2009, I was diagnosed through the New York State Cancer Services Program. Because of the high cost of insurance for the self-employed, I didn't have health insurance at the time.
Did you like this article?
Help us to keep locating and providing the information you want to read. Donate today.
Donate $5 one time | Donate $10 one time | Donate $15 one time I have three children, six grandchildren, and seven great-grandchildren. They keep me busy! I also take physical activity classes offered through a local hospital, including a "Healthy Steps" class, baton twirling, and belly dancing.

In August 2007, I began having heavy bleeding and I went to a nearby medical clinic. The doctors there found that I had something suspicious on my uterus. They referred me to a gynecologist who did a biopsy, which revealed I had cancer. I was then referred to a gynecologic oncologist, who did an additional biopsy on my cervix, which also showed the presence of cancer cells. To this day, the doctors say they are not sure which came first, the uterine cancer or the cervical cancer. The women in my family have a history of being healthy and living a long, long time. I was the last person I thought who would ever have to worry about a major health crisis. I have a beautiful family—two sons, three stepdaughters, four grandchildren, and a supportive husband. I have always been active and enjoy outdoor sports and activities, and I guess you would say I'm a workaholic.

Before I was diagnosed with ovarian cancer, I rarely got sick. Then, a few years ago, I had some symptoms that were unusual for me—I felt bloated and gained weight for no reason I could explain. I also noticed other things that were unusual for me, like constipation, and I felt nauseous when I ate. My doctors told me I had hypothyroidism, put me on medication, and the symptoms went away temporarily. I'm still not sure if the hypothyroidism symptoms were related to what came next. In November 2010, when I was 63 years old, I began to experience unrelenting pain in my upper right abdomen and around my right rear flank. It would wake me at night. I went to my family doctor and she ordered abdominal and pelvic ultrasounds. Kidney cysts were reported and I already knew about those. In addition, another cyst was noted—thought to be an ordinary ovarian cyst—although a large one.

The next visit was to my kidney doctor in March 2011. He looked at the ultrasound report, and strongly suggested I see about getting the ovarian cyst removed, just in case it was cancer. My mother died of breast cancer at age 52. Her mother—my maternal grandmother—and my older sister each had breast cancer. Both had successful surgery. I had some calcification, but no breast cancer. (Calcifications are deposits of calcium in the tissues. Calcification in the breast can be seen on a mammogram.) I was waiting for my turn to get the dreaded disease, since it was obviously in my family history. Instead, this happened:

In late 2005, after going through menopause and not having a period for one year, I suddenly had a full flowing ‘period.’ I was 52 years old. Luckily, I already had a regular gynecologist appointment scheduled the first week in 2006. I am 53 years young, married, and the fourth child of 13. My oldest sister and my mother are my best friends. And I have the best cat ever—Pierre. Overall, I have always been pretty healthy—I try to eat right and exercise. I like yoga, ballet, writing, reading, and cooking.

In the spring of 2013, I kept seeing a commercial for the Inside Knowledge campaign and kept thinking about it—‘I have those symptoms—spotting after menopause, a bloated feeling, having to go to the bathroom a lot, and this pressure/pain that was not like the cramps and pain I used to get with my period.’ 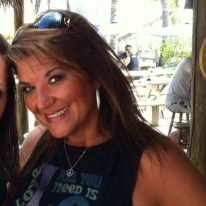 In December 2008, at 36 years old, Jill went in for endometriosis surgery. She was experiencing pain and the doctor thought it would be best to explore though he assured her it was Irritable Bowel Syndrome, which she knew she suffered from.

"Not knowing the signs of ovarian cancer, the day came for surgery and I went in thinking it would be easy with nothing to worry about since I have no family history of cancer. When I wakened, the doctor visited and said I would be in pain but fine – he had to remove part of my left ovary but it would not impede me or my ability to have children because it was still functional." says Jill.
Read more here... 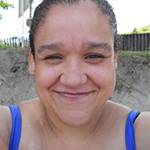 9 years ago Andreya was diagnosed with ovarian cancer. She was 25 and according to most people, she was too young to be a cancer patient.

"I was misdiagnosed for a while. By the time we know what it was, “Alfred” (that’s what my friends and I named my tumor) had grown to an impressive 14.5 inches and weighed in at 10 lbs. I was looking forward to finishing my Associates Degree to hanging out with my friends for the summer. Sometimes I look back on that summer and think, “Man that summer SUCKED!”…And then I think that was the moment my life changed." says Andreya.
Read more here...

Diagnosed with Stage 3b 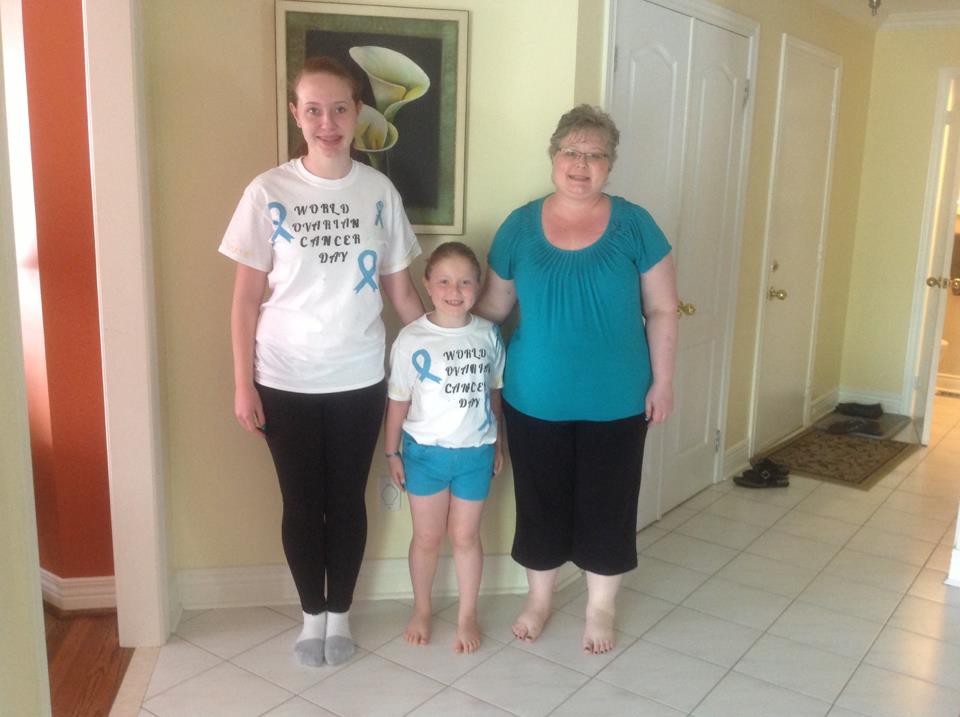 At 46 years old Renate was diagnosed with Stage 3b ovarian cancer on New Year’s Day January 2012.

"Our family has been blind sided by all of this. There is no history of ovarian cancer in our family. I had experienced stomach aches and heavier menstrual symptoms. I had an ultra sound in March 2011 and there was no sign of anything. I have 3 daughters that are 17, 13 and 6. I want a test to be found in their lifetime to diagnose this disease early. My two daughters are doing their part to create awareness by participating in a legacy girls study at Princess Margaret Hospital." says Renate.
Read more here... 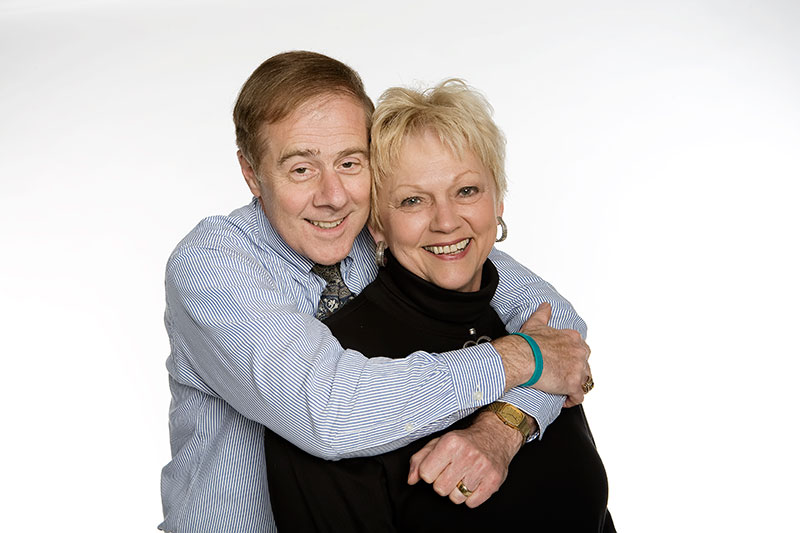 It all started for Joy around the holidays of 2001. She was feeling uncomfortable and experiencing bloating (wearing only elastic-type pants), eating a very small amount before feeling a back-up in her throat, being very constipated, losing her breath sitting back in a chair. Because of the symptom of shortness of breath Joy was sent to urgent care. She received a diagnosis of reflux with a recommendation to take antacids.

"It was Christmas time and our travel plans were set. So my husband and I set off on our two-week vacation from our home outside of Minneapolis, Minn. to Connecticut. Upon arriving, my sister saw my discomfort (perhaps with fresh eyes). She set up an appointment immediately with her doctor. He examined me and took some blood tests. The next evening he called recommending I have a CAT scan when I returned home, which I did" says Joy.

God does not care.
God does not love me.
Something is wrong with me because God allowed this to happen to me.
I’m not going to talk to God any more because it doesn’t do any good.
I deserve to be depressed.

Finding hope in Jesus can strengthen us through times of difficulty and despair even when darkness seems to surround us.
Find hope now

Test to see how much you know about Ovarian Cancer by clicking here.