Want to stay informed on the up-to-date info on Ovarian Cancer? 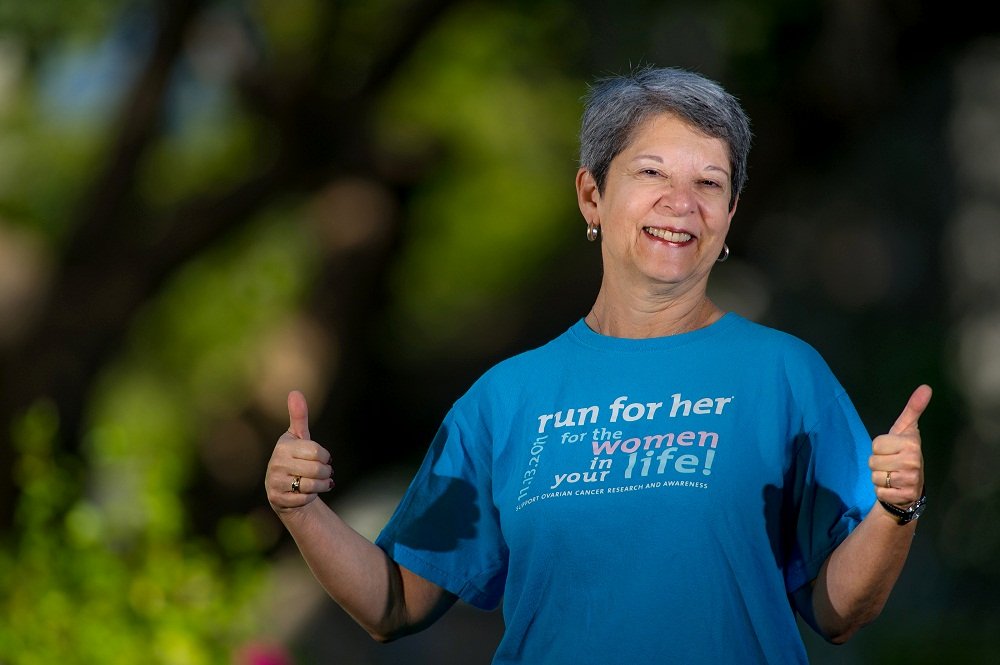 Doreen Braverman was pale and gaunt.

She could barely walk, much less run.

And she was facing rounds three and four of chemotherapy.

How she got out of bed to participate in her first run for her® 5k Run and Friendship Walk, a charity fundraiser hosted by Cedars-Sinai to generate funding for ovarian cancer research and awareness, is a mystery – yet it's not.

"I remember sitting on the median on Third Street and waiting for my team members to finish. A friend from the Writers Guild, at the time, was one of the first to finish. After crossing the finish line, he came and sat on the curb alongside me," Braverman said of the experience four years ago. "Seeing all the Team Doreen signs, family, friends and former colleagues was an emotional boost that was tremendously meaningful at a time when my physical and emotional resources were very low."

Team Doreen was started by her husband and two daughters in 2008, the year Braverman's ovarian cancer was discovered. However, her relationship with the disease, like many, began with the tragic death of a loved one. A 20-year-old family friend, Robin Babbini, lost a battle with the disease. Babbini was diagnosed at age 17 with stage-three ovarian cancer, Braverman said.

"She complained of abdominal pain and had other symptoms for a year prior to her diagnosis," she said. "Her disease was quite advanced. She did manage to graduate high school and complete one year of college. … This was someone who went to nursery school with one of my daughters."

Babbini's mother, Paulinda, founded the Ovarian Cancer Circle to educate women about the symptoms of the disease. During a Lunch and Learn event co-chaired by Paulinda in spring 2008, Braverman remembers picking up a bookmark with Babbini's picture on it, as well as a list of ovarian cancer symptoms. One of those symptoms – bloating – stuck with Braverman.

In August, while out of town, Braverman experienced bloating around her abdomen. Instead of thinking it might have been gas, Braverman thought, "Oh my gosh, I have ovarian cancer."

When she returned, she scheduled an appointment with her gynecologist. On Friday, Aug. 15, the doctor conducted a transvaginal ultrasound.

"All he could visualize was fluid, a sign cancer cells were multiplying," she said.

Braverman was referred that afternoon to Andrew Li, a gynecologic oncologist at Cedars-Sinai, and was diagnosed with ovarian cancer. That following Monday, three days after her diagnosis, she underwent debulking surgery to remove the cancer. Braverman spent a week in the hospital, and on the eighth day after her surgery, she began chemotherapy

Braverman had no family history of ovarian cancer.

Skip ahead four years, and Braverman's run for her story, albeit with cancer still looming, is much more defined. Braverman and her youngest daughter, Lizzie, are co-captains of Team Doreen.

The team has dozens of regular participants each year and has raised more than $35,000 for the cause. Team Doreen has been among the largest teams three times.

This year's event – scheduled for Sunday, Nov. 10, 2013, at Pan Pacific Park – will continue to raise much needed funds and awareness of ovarian cancer. Money raised by run for her is strictly for research and awareness. Run for her was designed, in partnership with Cedars-Sinai, by Kelli Sargent, who lost her mother to ovarian cancer. Sargent is now a senior team lead and producer in Community Relations and Development. The inaugural event took place in a Cedars-Sinai parking lot in 2005.

Although her daughters have tested negative for any genetic mutations linked to ovarian cancer, Braverman said, the recommendation is for them to take birth control for at least five years. As for herself, Braverman's cancer has been in remission since December 2008.

"I'm like a diabetic. At stages three and four, there's no cure but it's manageable," she said.

A 23 Year-Old Ovarian and Endometrial Cancer Survivor
With no family history of cancer, Hillary Gozigian had her entire reproductive system removed all before her 24th birthday. Here is her story.

The day before the Army mobilization Kat learned that the ovarian cancer she thought she beat nearly four years earlier had returned--and in a more virulent form.
Read her story here...

At the age of 23 Blake was diagnosed with ovarian cancer.
Read her story here...

Angie’s story shares her journey through Ovarian cancer from the beginning to the end of her chemo treatments. It was important to Angie to share this very difficult time, her personal daily journal. It is a very compelling account of Angie’s ability to continue working, attending college and getting her Masters degree.

This is very insightful as we need to know that life does go on when we might feel its over. It’s important to never give up hope, to keep a positive attitude.

If you are able to work or were attending college keep going as Angie did, God will get you through this, as He did with Angie, and myself.

Angie's Story - This is what ovarian cancer looks like

Naomi was spending a typical weekend day working out with her trainer at the beach, but came home and felt feverish. Within an hour her fever was 103 degrees.
Read her story here...

At 17 Jenn was a senior in high school, had a serious boyfriend, loved being with her girlfriends, and basically did what normal 17 year-olds do when she was diagnosed with a stage 1-B complex dysgerminoma of the left ovary
Read her story here...

Mitzi had a physical in July with a Nurse Practioner (NP) at her primary care clinic. Several weeks later she received a call that her PAP was abnormal and to follow-up in October, 2001 for a repeat test. She did and it came back normal. Mitzi had been having some burning pain on her right side but didn't pay much attention to it. During the October exam, the NP mentioned that her uterus was pressing down and to have it checked by a gynecologist. Mitzi didn't get the impression it was urgent and asked if she should do it soon. The nurse answered that it didn't seem like a problem but told her when she had the time get it checked.
Read her story here...

Pat's story includes her mother, younger sister, and herself. Pat's journey with cancer began in February 2005 with her diagnosis in July 2005 at the age of 46 at Stage II.
Read her story here...

Amanda was 24 when she was forced to fight for her life, at a much younger age than the usual age group that ovarian cancer is known to target.
Read her story here...

Great video for information on the tests used for diagnosing Ovarian cancer. Dr. Poynor address’s the fact that there are early warnings of this disease. The warnings are vague, it’s important we know our bodies.

I highly recommend you watch this and be alert to any changes in your bodies no matter how small or insignificant. Insist on tests. No one wants to hear at a late stage that they have cancer.

Amanda Weinrich was 19 years old and diagnosed in September 2010 with a dysgerminoma of the right ovary.
Read her story here...

Tina was 29 when diagnosed with stage 111c Ovarian Cancer during the fall of 2007. She had been experiencing pain in the abdomen, painful intercourse and her periods where longer and heavier for the previous 5 years.
Read her story here...

Haley Mellert was touched by ovarian cancer back in 2006, when she was 25 years old. She had left work early due to severe lower back pain, which ultimately led to her going to the ER later that night.
Read her story here...

Tina O’Boy was told at the age of 36, that she had ovarian cancer and would need a hysterectomy. She was devastated. She been undergoing infertility treatments, so physically and mentally Tina had already felt pretty beaten up. But now, everyday, she feels lucky she is a survivor. Going on 4 years of remission, she has never felt healthier or happier.
Read her story here...

Liz Hyatt, was 13 weeks pregnant when she experienced pain in her side, Liz visited her doctor, she was advised it was not serious. The pain was worsening, she then saw another doctor who advised the same. The doctors felt this was a benign tumor. A third doctor suggested they perform surgery and biopsy the mass. Liz was diagnosed with a form of ovarian cancer, this was different as the mass was not attached to the ovaries, it was attached to the abdomen. The suggestion that she might have to terminate the pregnancy was the worst news she and her husband could hear.

This message is emotional, Liz has taken us through her entire passage from the first day of discovery to the delivery of her healthy baby boy. News that could have been horrific became victorious. Liz is now active with Relay for Life.


Ovarian Cancer Survivor: "I am 7 months pregnant, and I am a survivor."
>> Next Page

Test to see how much you know about Ovarian Cancer by clicking here.